From the Middle Ages to the 21st century: Jewish cemeteries as testimonies of their time

The history of the Jewish cemeteries in Frankfurt and of the individuals laid to rest there is as fascinating as it is historically relevant.

The City of Frankfurt has twelve Jewish cemeteries. Three of them are directly connected to our Jewish Community: the Old Jewish Cemetery in Battonnstraße, the Jewish Cemetery on Rat-Beil-Straße, and the New Jewish Cemetery in Eckenheimer Landstraße. The rest are smaller and no longer used. They are located in areas such as Rödelheim, Heddernheim and Bergen-Enkheim.

The first Jewish community, documented from the middle of the 12th century, settled south of the Bartholomew Abbey, today's cathedral. At the same time, Frankfurt's oldest Jewish burial ground was established. Initially located outside the city walls of the time, it was then inside the city walls when the second fortification wall was built. Today, the cemetery, one of the oldest Jewish burial grounds in Germany, is located in Battonstraße. 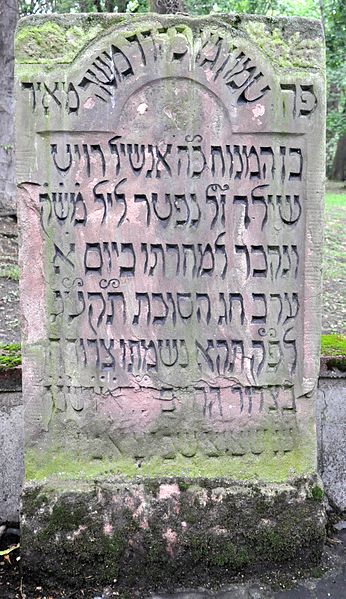 The tomb of Meyer Amschel Rothschild, who died on Saturday 19 September 1812The cemetery in Battonnstraße dates back to the Middle Ages. It is the oldest Jewish cemetery in Frankfurt and the second-oldest in Germany, after Worms. The first tombstone is dated 1272. Until the 16th century it also served Jewish communities in the wider region, from Wetzlar to Aschaffenburg. When it was originally established, in the 13th century, it was located outside the city walls, but in 1333 it became integrated into the growing city of Frankfurt. In 1462 Frankfurt City Council forced the Jews to leave their established neighbourhood near the cathedral and relocate to an area close to the cemetery, just by the old Staufian city walls. This area, known as the Wollgraben, was to become the ‘Judengasse’ or ‘ghetto’, set up in deliberate proximity to the burial grounds.

The Battonnstraße Cemetery was used as a burial place by the Frankfurt community until 1828. By the early 19th century it numbered approximately 6,500 tombstones, the majority crafted from local red sandstone. While the older stones are small and less ornate, newer ones display family coats of arms, which often portray the family names. Other motifs include not only blessing hands or the Levite pitcher, which were already common symbols at the time, but also symbols such as fish traps, the moon, a pitcher and shields.

One of the most famous figures interred in the Battonnstraße Cemetery is Mayer Amschel Rothschild, the founder of the banking dynasty that remains with us to this day. His tomb dates back to the year 1812.

The Battonnstraße Cemetery was largely destroyed during the air raids on Frankfurt in 1943-44. The only part that remained largely intact is the eastern section, which offers a good idea of what a mediaeval Jewish cemetery would have looked like. When the cemetery was restored in the 1950s, about 175 valuable tombstones that had been removed to save them from the bombings of World War II were reinstated and now stand along the inner edge of the cemetery wall. Numerous high-profile members of the Jewish Community in Frankfurt are interred in the Field of Honour in the south-western section of the cemetery, including Rabbis Josua Falk, Nathan Adler, Meir Schiff Katz and Pinchas ben Zwi Horowitz.

Today the cemetery is adjacent to Börneplatz, where the Museum Judengasse can be found along with the memorial to Börneplatz Synagogue, which was destroyed in the pogrom night of 9 November 1938. In 1996 the cemetery wall itself was turned into a memorial to commemorate the 12,000 Frankfurt Jews who were deported and murdered, Anne Frank among them. 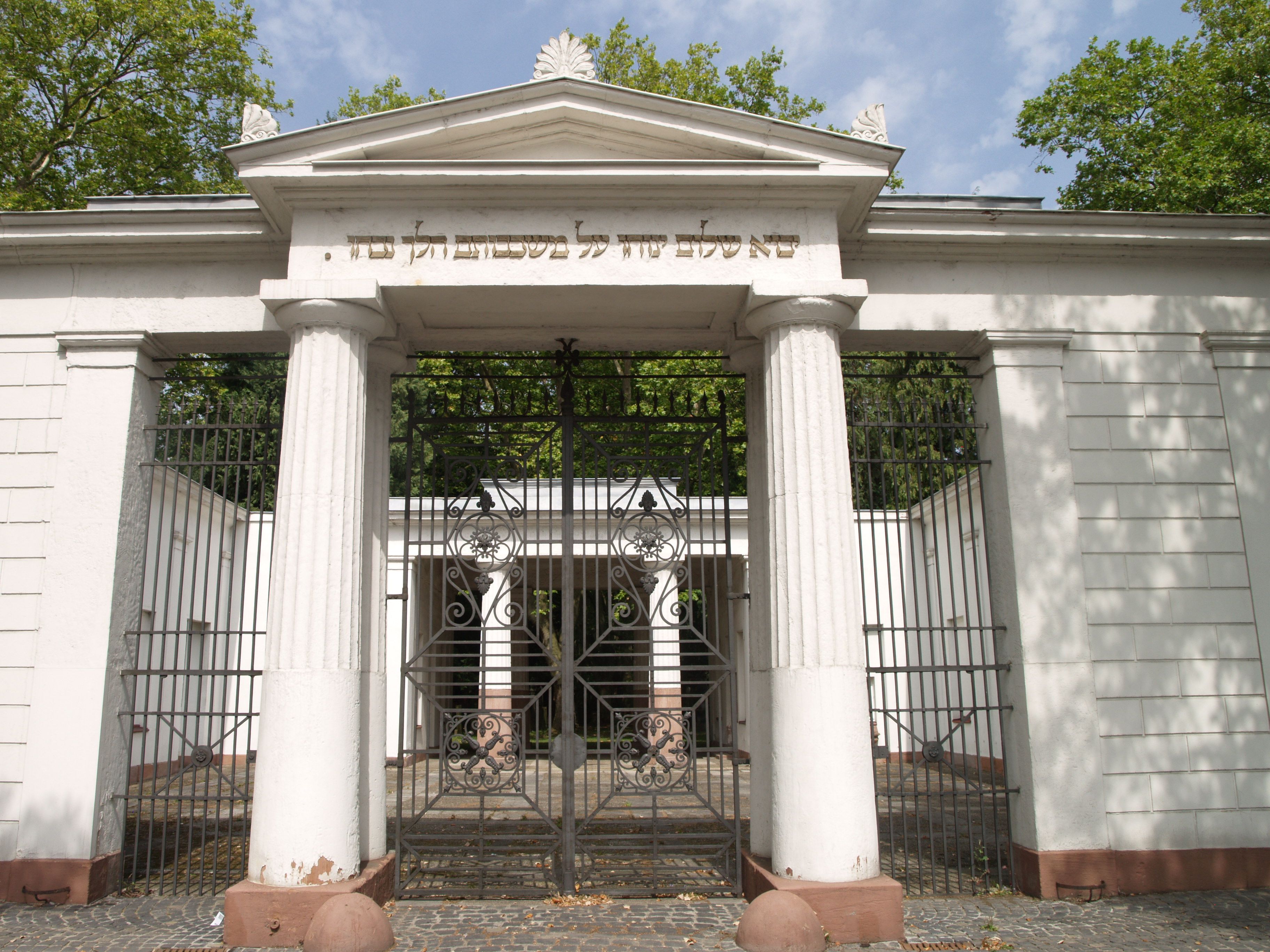 The cemetery entrance is strictly classical in styleThe cemetery in Rat-Beil-Straße was established in 1828. Today, the area is enclosed on three sides by Frankfurt’s main cemetery. The strict classical design of the entrance bears the Hebrew inscription, ‘Those who walk uprightly enter into peace; they find rest as they lie in death’ (Isiah 57:2). Designed by Fritz Rumpf, its architecture reflects the remodelled self-image of the Frankfurt Jews at the time, characterised by their emancipation. This is also reflected in the ornamentation on the gravestones: while those of the earlier years, until shortly after 1828, were more traditional in style, the stones that were added during the course of the 19th century were increasingly designed according to the individual tastes and financial means of family members. The result is an array of magnificent monuments to the deceased.

Over the years the tombs of Rabbis Samson ben Raphael Hirsch (1808-1888) and Israel von Stolin (1869-1921) have made this cemetery a place of pilgrimage for orthodox Jews from around the world, many of whom leave prayer notes or lit candles on the sleek tomb of the ‘Miracle Rabbi’ Stolin. Other rabbis who were active in Frankfurt during the 19th and early 20th centuries are also interred in the cemetery in Rat-Beil-Straße and include Salamon Breuer (1850-1926), who succeeded Samson Raphael Hirsch, and Markus Horowitz (1844-1910) and Nehemia Anton Nobel (1871-1922), both of whom were rabbis of the liberal movement.

As the Frankfurt Community gradually reformed, the Israelite Religious Community (IRG), founded in 1851, began to distance itself and eventually left the main community completely in 1876. That same year, the IRG acquired its own burial ground which, at the time, bordered on the eastern wall of the Rat-Beil cemetery. After the cemetery was extended, the IRG burial ground and wall were integrated into the cemetery of the main community. Their tombs retain the sleek style that was customary at the time.

Between 1938 and 1943, approximately 800 Frankfurt Jews considered suicide the only escape from persecution and deportation by the National Socialists. Their tombs can be found in the front section of the cemetery. 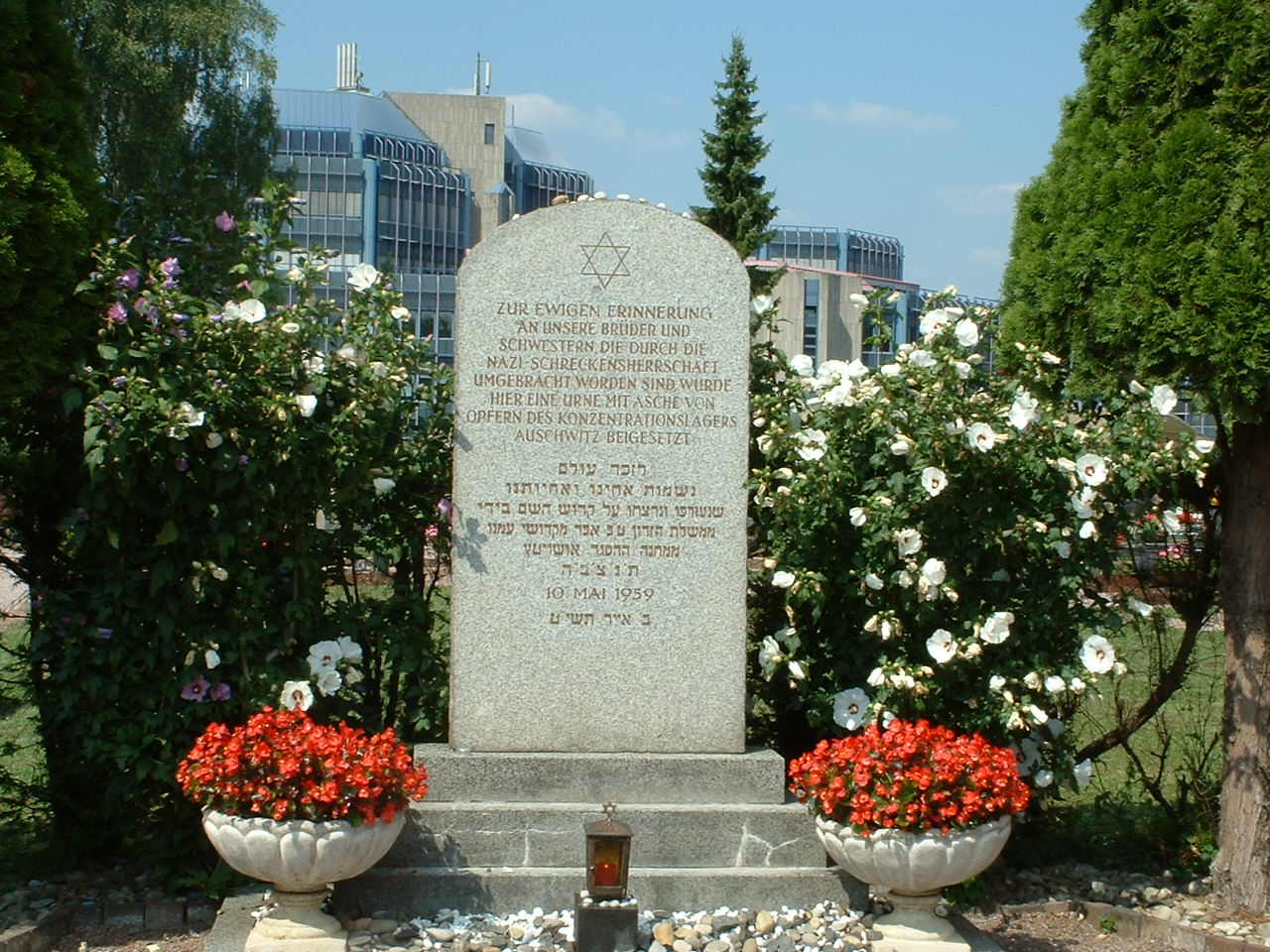 Memorial to Frankfurt Jews murdered under the National Socialist regimeThe New Jewish Cemetery in Eckenheimer Landstraße has been a burial ground for the Jewish Community in Frankfurt since 1928. Covering an area of 5.4 ha, it borders the main Frankfurt cemetery to the south. The forecourt and adjacent cemetery buildings are built in brown clinker brick in the style of ‘Neue Sachlichkeit’ (‘New Objectivity’) to plans by the government architect Fritz Nathan (1891-1960). The main entrance consists of three adjacent gateways and bears the inscription in Hebrew, ‘That I may walk before the Lord in the land of the living’ (Psalm 116:9). The citation is repeated in German on the frieze above the gateway opposite, which leads to the burial ground. At the end of the main central axis is a menorah.

In the front section of the cemetery is the monument to the Frankfurt Jews murdered under the National Socialist regime. Among the graves that can be found here are those of the first Chairman of the Israelite Community until 1939, Dr Julius Blau; the religious philosopher Frans Rosenzweig, who died in 1929; active members of the post-war Jewish Community, and the social politician Henriette Fürth, who died in 1938.

In the 19th and 20th century numerous Frankfurt suburbs were incorporated into the city, and many of the smaller Jewish cemeteries were no longer used. These are not open to the public and are located in: